I read three poems from ‘Dualities’ on the Eat the Storms podcast from Damien Donnelly, with Julie Stevens, Steve Deneham and Mari Maxwell. 10 October 2020:

Well – on You Tube

A sound recording of my poem ‘Well’ based on the story from Chapter 4 of St John’s Gospel, set to music and filmed with a drawing-in-progress of a well, was compiled by Bean Baker of Elim Church in Cheltenham in May 2020. Bean, a first rate musician and worship leader, as well as a technical genius, supplied the music … and his talented mother did the drawing which Bean filmed.  My thanks to them both for making my poem come alive. It is now on You Tube https://youtu.be/F7iMtDy6OUA and has subsequently been included in an on-line Sunday Service via Zoom, and streamed via Facebook during the pandemic. 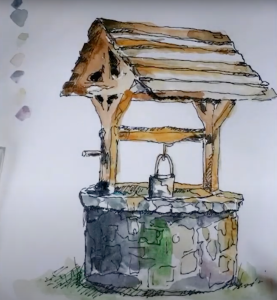 A programme for Corinium Radio recorded in August 2019 in which I read a few poems from my pamphlet Interned at the Food Factory (Indigo Dreams, 2019) and also introduce a couple of sheep poems from a recent sequence on ovine themes.
Corinium Radio 20 August 2019

Two programmes for Corinium Radio were recorded on 8 March 2018 – interviews with Rona Laycock for The Writer’s Room.  In the first, I spoke of my (then forthcoming) pamphlet “Interned at the Food Factory” from Indigo Dreams Publishing, and read two poems from it: “Postulant in the Pasty Factory” and “Eating Strawberries with an Alien”. We talked about the very different style of these two poems in choice of vocabulary and tone, the former being prosey as befits the mundane subject matter and the latter being sensuous and exotic. We also talked about my work with Gloucestershire Writers’ Network, Cheltenham Arts Council and Poetry Cafe Refreshed in Cheltenham, Buzzwords and Cheltenham Poetry Festival, mentioning Smokey Joe’s Cafe and Suffolk Anthology Bookshop as Award Winners and venues for poetry – and other – events. I also read a poem “Ivy” from a pamphlet with the working title of “Stamens and Stigma” (awaiting a publisher!) and a Villanelle “Water Walking” from a second pamphlet-in-waiting, with the working title of “A Suggestion of Fishes”  two other pamphlets currently looking for publishers.  Here is the link to the first programme which was broadcast on 12 March 2018:
Sharon Larkin in The Writer’s Room first broadcast 12/3/18 and here is the link to the second programme: Sharon Larkin in The Writer’s Room 26/3/18

I was interviewed by John Oldham of Radio Winchcombe on 18 MarH 2017, in my roles as Chair of Cheltenham Arts Council and Cheltenham Poetry Society.   This was rebroadcast on Sunday 9 April 2017 on BBC Radio in the West and is now available on BBC Radio iPlayer here: http://www.bbc.co.uk/programmes/p04y50yg#play